Why is this day special to Australians? Read this article to learn more about Remembrance Day.

The Japanese Commander Responsible for the Bombing of Darwin Committed his Life to Christ.


The Power of Forgiveness

Japanese leader Prime Minister Shinzo Abe visited Darwin on the 17th November 2018, honouring those killed during  the Japanese bombing of the city in World War II. He thanked Territorians for welcoming him with "heartwarming hospitality".

Captains of the Soul by Dr Michael Gladwin

The judges described Michael Gladwin’s winning book as ‘a history of national importance and an insight into the Australian character’
Known affectionately as ‘Padres’, chaplains have been integral to the Australian Army for a century.
To read more and to purchase click here 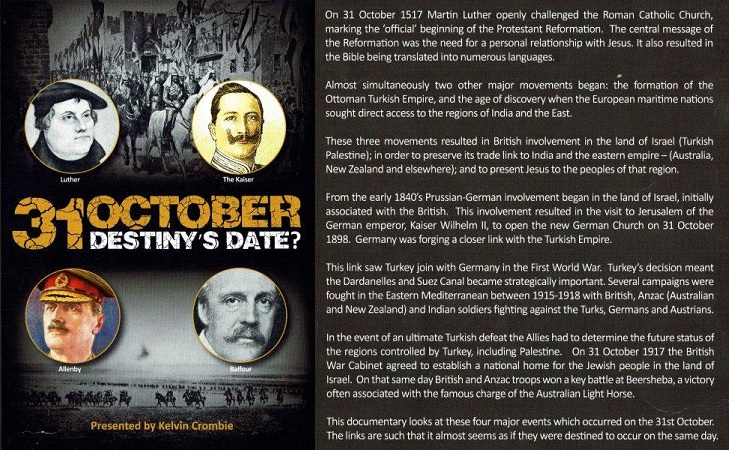 Kelvin is producing '31 October - Destiny's Date?' with a close friend, former BBC cameraman Tom Russell, who also edits and produces documentaries. Tom's camera work is nothing short of brilliant. Has done Antiques Roadshow for 30 years and every year does centre court Wimbledon.

For this documentary Kelvin have numerous very good interviews, including the heir to the German throne, Prinz Philip von Preussen, who is also an evangelical Lutheran pastor; plus Lord Balfour; Lord Simon Reading; Sister Joela of the Mary Sisters in Darmstadt, and others.

It endeavours to portray the bigger picture so that Aussies don't get too carried away and think it all revolved around us! Learn more at https://www.heritageresources.com.au/


At 4pm on October 31, 1917 Beersheba lay 6 km across an open plain protected by 4,000 entrenched Turks with guns, artillery and German planes. Now daylight was fading and the weary, thirsty troops desperately needed to capture the town’s abundant water wells. 800 Light Horsemen lined up for a do-or-die charge.

The ANZAC soldiers’ successes in the World War 1 Palestinian Campaign remain largely unknown, overshadowed by the lives lost at Gallipoli and on the Western Front. This website hopes to change this. The victory at Beersheba was one of the pivotal events that turned the tide of history for the Middle East. The daring and adventurous spirit of the ANZACs brought the breakthrough that ultimately defeated the same Turkish armies that had annihilated them in Gallipoli.

The call is going forth for the nation to commemorate the centenary of the Middle Eastern Campaign from the Suez to Aleppo through 2016-2018, especially the heroic Beersheba charge. The courage, sacrifice, endurance and mateship of the ANZACs helped them overcome impossible odds to pull off unprecedented victories.

Read more about the Battle of Megiddo by clicking here to the website of The National Army Museum, London

Battle of the Coral Sea - Lest We Forget The Coral Sea holds great historical significance for Australia and the United States. In May 1942, it was the scene of a naval battle that reversed the tide of World War II in the Pacific. The Protect Our Coral Sea campaign has produced an 8-minute documentary in honour of those who fought and died in the Battle of the Coral Sea.

You well might ask what relevance this World War II story has for us today. Arguably the 7 May 1942 marked the crucial day of the Battle of the Coral Sea and many military historians would assert that this battle was the turning point in the war. 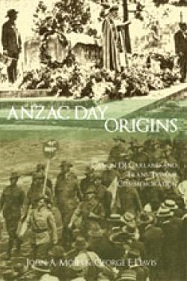 
Read more about this book

Part 1:
A discussion of the Christian foundations of ANZAC Day.


Part 2:
This discussion about the Christian foundations of ANZAC Day continues.

The Story of John Ridley

The story of John Ridley  as told by his daughter Ruth. Born to be a Soldier and the story of "Mr Eternity" Arthur Stace.  Interviewed b y Neil Johnson on Vision Radio Network.

Greater love has no man than this, that a man lay down his life for his friends.

The Australian and New Zealand armed forces commonly known as ANZAC's have served in both WW1 and WW2 as well as other theatres of war. Amongst the major achievements has been the Australian Light Horse charge at Beersheba with 800 men on horseback on October 31st, 1917, when God used one of the most recent nations in the world to help take Jerusalem from the Turks and Germans, liberating Jerusalem from four hundred years of rule by the Turkish Ottoman Empire, - eleven Crusades throughout history had been unable to achieve, as well as the military genius of Napoleon. On 31st October 1917, the day of the Beersheba charge, the British Government drafted the Balfour Declaration, which was the foundation for the recognition of the State of Israel.

The Recessional used in ANZAC Services was an ode written by the English poet Rudyard Kipling in 1897. It was originally published in the Times of London for Queen Victoria's diamond jubilee. The poem struck a chord and speedily became an imperial hymn opening with the words God of our fathers, known of old and set to the tune Melita. It was composed just in time for use in the commemoration of the dead from the South African War and has since become even more famous as the source of the often quoted words Lest we forget in ANZAC Day ceremonies held annually on the 25th April to commemorate the sacrifice of those who gave their lives. During the eight months of the Gallipoli campaign the Australians sustained 26,000 casualties of whom 8,000 died.

Many graves throughout the world remember the sacrifice of over 102,000 Australian military personnel who died with the symbol of the cross which reminds us of the verse in Colossians 2:15 "having disarmed the powers and authorities, Jesus made a public spectacle of them, triumphing over them on the cross". 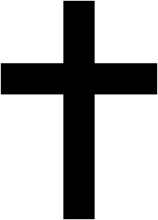 A selection of videos

William McKenzie
Fighting McKenzie & Gallipoli The story of William McKenzie, a Salvation Army chaplain and one of the first to land in Gallipoli after the initial attack. Please click here to view this 21 minute video produced by Adventist Media Network. (See also audio's below) 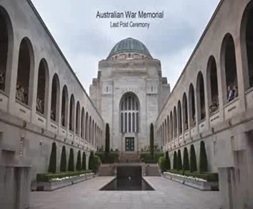 ANZACs: Gen. Harry Chauvel, The Liberation of Jerusalem, and the Influence of a Christian heritage.

The Anzacs and Israel - a common destiny

As an infant watching Tasmanian soldiers depart for the Boer War, Bernard Law Montgomery told his mother he was going to be a soldier when he grew up.

Left for dead on the battlefield of Meteren during WW1 Captain Montgomery, not needing the grave already dug for him, went on to become the finest General in WW11, turning the tide against the previously invincible Rommel's German Axis forces in North Africa, with famous battles such as El Alamein and Tobruk.

Montgomery, now Field Marshal read two chapters of the Bible each day with devotions morning and evening, as observed by one journalist who wrote after the battle of El Alamein:

"This was total war, waged with more weight, power and concentration than the Nazi war machine ever had encountered and directed by a master of total war - a man who said his prayers in his desert tent night and morning and quoted the Bible to his troops to make them better fighters"

Montgomery's father had been a Bishop in Hobart at the turn of the 20th Century. His wife said this in a Bible Success band booklet written in 1945:

"I wonder how many of my readers have been brought up to learn a verse from the bible every day? I was brought up to do this and as a consequence know nearly all the Psalms and most of the New Testament by heart.

And I brought my children up to learn a verse from the Bible every morning before breakfast. It may be that Field Marshal Montgomery's knowledge and love of the Bible starts from the this fact. As is well known, the two books he carries with him are the Bible and Pilgrim's Progress.

England and America owe their greatness to the Bible. Let us pray that the Bible, God's Word to us, may again take its rightful place in our hearts and homes! I would urge upon all my readers to do your utmost to bring the Bible back to the nation. And the best way to do that is to begin in your own home and for you and your children to learn a verse of the Bible by heart each day" 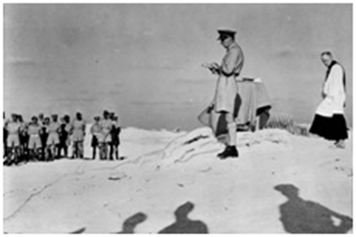 MAY 16 1943 Montgomery Leads Prayers near front lines. Field Marshal Montgomery commenced prayer meetings when he arrived in Egypt. His father was a Bishop in Tasmania. 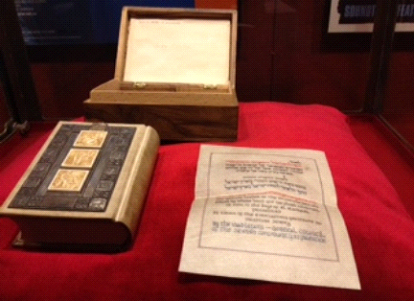 The Montgomery Old Testament Bible with the message "Field Marshal Viscount Montgomery, GCB, DSO, the gallant leader of the victorious forces by whose hand God has placed salvation in Zion in the days of El Alamein presented in token of the everlasting gratitude of Palestine Jewry by the Vaad Leumi, General Council of the Jewish Community in Palestine".

'Up the Track with JESUS – Reflections on KOKODA for Men' is an invitation to look at the qualities of COURAGE, MATESHIP, ENDURANCE and SACRIFICE – first in the lives of the Australian soldiers who fought along the Kokoda Track, and then in the life of JESUS.

These 17 devotional reflections, based on stories from the 17 chapters of Peter FitzSimons’ best-selling book KOKODA. They are written to challenge men to embark on the ultimate adventure – following JESUS up the Track that leads to heaven. 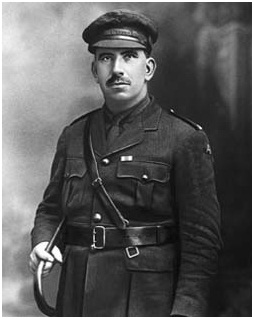 The Coo-ee March began with 26 men, multiplying ten times by the time it reached Sydney. Click the link to read more.

Matt Prater has worked in Radio since the age of 15, working as an announcer, in sales, training staff and copy writing. He has also been a youth pastor, DJ, a Children’s entertainer.Here are over 330 radio interviews.